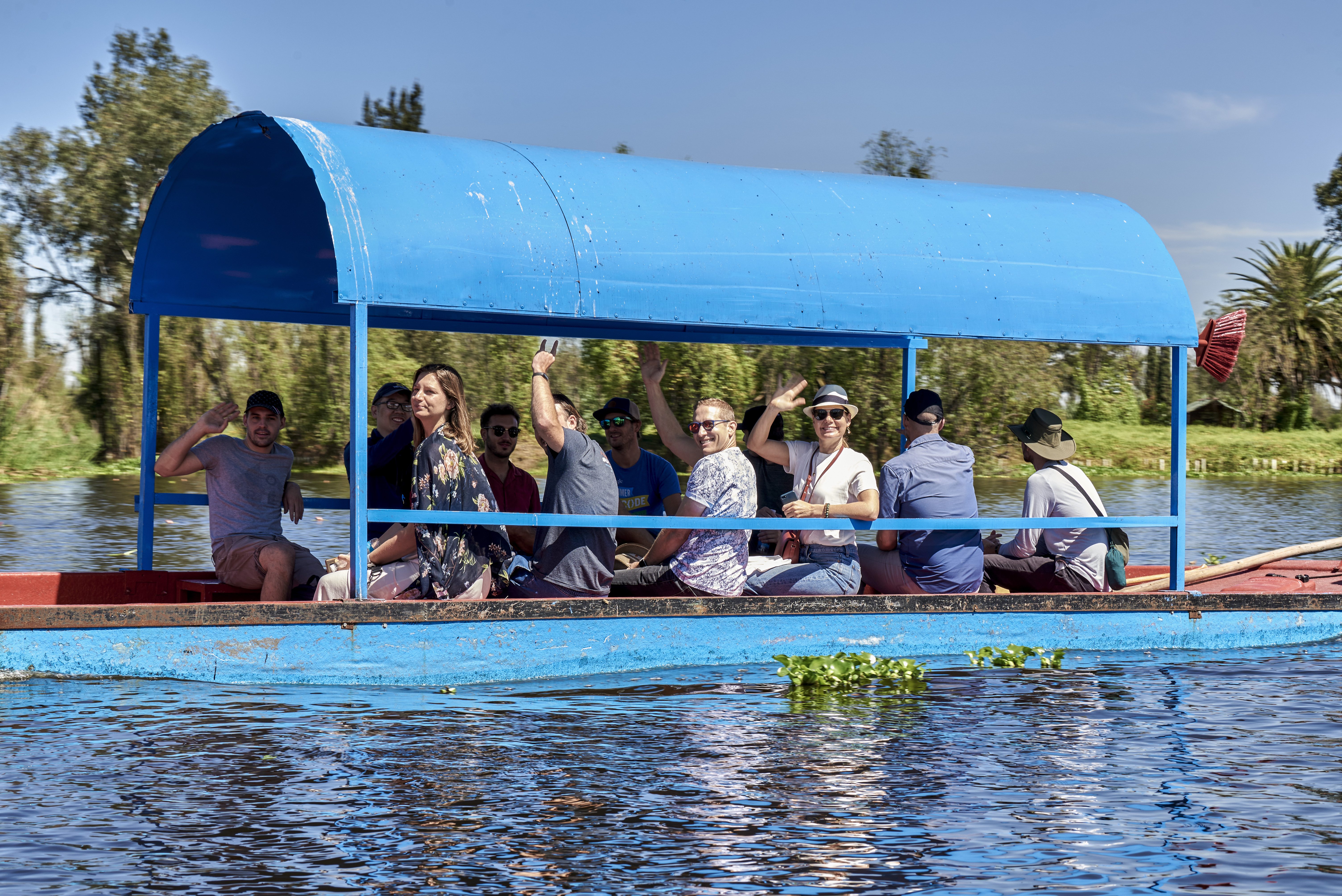 How We Built Founder Summit‍

If you know us, it should come as no surprise that if we were going to do the whole "hosting a conference" thing, it was going to be a little different than anything else.

Founder Summit is an IRL event created by Calm Company Fund and SureSwift Capital — think of it as a well-done company retreat but for Calm Company Builders. Capped at 150(ish) people, it is focused on creating space for conversation and shared experience rather than Keynotes.

We firmly believe the value of conferences lie in the connections you make, not big star names projecting into huge cold convention centers. Tyler Tringas, GP at Calm Company Fund, put it best, "a KPI of Founder Summit: Everyone increases the number of contacts they can call in a rough moment/day."

A KPI of Founder Summit: Everyone increases the number of contacts they can call in a rough moment/day

A KPI of Founder Summit: Everyone increases the number of contacts they can call in a rough moment/day

We often get asked why we started Founder Summit, what it took to get it off the ground, and importantly, would we do it again? We’ve written this to answer some of those questions:

Why does Founder Summit exist?

Essentially, it exists to hold space for deep and meaningful interactions over curated experiences.

Often, companies in our community are solo founders or small teams so we need places, more than most, to be able to connect. We wanted to create a space for Calm Company Fund founders and mentors, alongside other like-minded founders building profitable, sustainable, calm, remote companies to meet, chat, recharge, have fun, and leave with a ton of energy.

When we began to plan the Summit we set some goals for what success would look like to us:

We started off with a tweet. The responses confirmed what we thought; something like this didn’t exist yet and we were the ones who could create it. Here’s what we heard:

Where should we do it?

Choosing Mexico City (CDMX) as the location for our first ever Founder Summit wasn’t a hard decision:

People on the ground. Tyler lives in Mexico City. He could visit locations, suggest venues and create on the ground partnerships. We also brought in help in the form of Sofia Provencio, a member of the General Congress of the United Mexican States and advisor to the Mexican Cultural Commission — a huge win for Founder Summit.

Cost of living. We wanted a place that could provide world class experiences at an affordable price tag.

Location. With the majority of our community being in the US, CDMX is an accessible airport. CDMX also has great flight connections from major capital cities like London and Paris
Remote workers. Mexico City is a haven for remote talent with fast WiFi, increasing number of coworking spaces, great coffee shops and, of course, sun.

This was a first visit to CDMX for many so we wanted to ensure Summiteers had access to as much of the city as possible — often, you end up at a conference in a fantastic city that has so much to offer, yet get to see and experience none of it as you’re stuck in a venue all day. It also means local businesses don’t benefit from the increased numbers in their city. We put on talks, workshops and events at cafes, restaurants and community spaces across the city. Alongside that, the opportunity to see even more was presented during our evening events. Options included a taco crawl, rooftop drinks, dinners in Mexican restaurants, fun workshops by local providers, and a closing night party in a historical venue. You can read more about what we got up to here.

We did want one central meeting, however. This was the Four Seasons CDMX — central location, enough rooms for attendees if they wanted to stay, a conference room to kick of the Summit, and importantly, childcare options.

Agree on a minimum number of rooms. You cover this cost or pass it on to attendees.

Minimum number of events. The Four Seasons CDMX hosted opening night drinks and the opening talks of the Summit.

Minimum spend on food and drink. This could be the opening night drinks or amount guests spend across the time of their stay.

The higher your numbers are for each of these, the bigger the discount. The risk is if people drop out or cancel, as a company you have to cover the cost. Doing it in a pandemic, this was definitely a worry and something we did have to do.

Building in the times of COVID

Founder Summit 2020 was scheduled for March 2020. The agenda was set, speakers and venues confirmed and people were already flying in when COVID restrictions were announced — we had to cancel the Summit. A loss not only for us, but all the partners we were set to work with.

Those who had already landed gathered informally. We received messages for weeks about how fantastic that community was, even without the event around it. It put the wind back in our sails.

In the May of 2021, COVID numbers were dropping. We asked 2020 ticket holders if they’d come to an October event. The response was overwhelmingly positive. We decided to go full steam ahead…with some caveats:

Keeping the community in the loop

In the time between the first event being canceled and the one that happened, we built Founder Summit Remote — it operated on the same principles as Founder Summit IRL but was entirely online.

Founders needed community and support more than ever so we created an invite only Slack group for founders, funders and builders of Calm Companies. We serviced the community with roundtables, masterminds, panels and workshops that would be useful in the unprecedented times. It was one of the buzziest communities any of us had ever been a part of.

Having this community meant:

How are we going to brand this thing?

Founder Summit is a partnership between Calm Company Fund and Sureswift Capital. We decided that we wanted something independent of both for a variety of reasons:

A core goal of branding Founder Summit CDMX was “be local”:

Be local in who we work with, where we spend our money and how we visually represent the conference.

Be local in our understanding of culture and startupland.

Be local in terms of the places we visit and recommend, the venues we use and the food we consume.

A big shout out to Sofia, our person on the ground, who worked incredibly hard with us to ensure we hit those goals.

We also wanted something distinct that didn’t play into Mexican stereotypes nor come from a colonial gaze.

As the Summit took place during the week of Día De Muertos (day of the dead), we started there for inspiration. We worked alongside Mexican designers and were introduced to the concept of alebrijes — fantastical mythical animals often translated as spirit animals. We used the iconography of the alebrijes as the base for the Summit’s visual identity. The tote bags and notebooks gifted to all Summiteers were branded with this visual — and were, of course, made in Mexico.

As mentioned previously, a core goal was for people to feel welcomed and included. Here were some of the things we put into place to attempt to do that:

Inclusive language. What are people’s preferred pronouns, how are we referring to a group of people (hint: ideally, not ‘guys’), and how do we avoid assumptions that might exclude certain groups of people, even if the exclusion is unintended?

No war metaphors. The startup world is littered with war related ideology — from the Art of War being over quoted, to talent wars, moats, battles, and ninjas, the theme is constantly at play…and it can be alienating.

Children. People have children and to presume they have someone else who can take care of them excludes people from participating. Having childcare on site and welcoming children was important to us.

Safe spaces. Founder Summit would be the first IRL event after the pandemic for many. We wanted to create occasions for people to have conversations that were pertinent to them. We hosted a women founders rooftop drinks and a Latinx founders social to allow space for those conversations.

Food and drink. Often an afterthought, but core to creating inclusive events. We ensured all dietary restrictions were catered for and that there were always non alcoholic beverages that were as exciting as the alcoholic ones — water and coke while people have fancy cocktails doesn’t feel great.

As this was our first ever event, the goal was to cover costs, not make profit.

The pricing was pretty much figured out from day one — total cost divided by number of attendees was a rough sum. Importantly though, we wanted to ensure that Founder Summit was accessible so we built in a tiered ticketing system:

Figuring out a person’s ticket cost was a lengthy process as we didn’t have a tier system formalized. The ticket application had a tick box: “would money be a barrier for attending”. Importantly, the tick box didn’t determine whether you were accepted for a ticket —  if a ticket was approved and money was a barrier, we’d work to figure it out.

Scholarship tickets and partially subsidized tickets were possible due to us budgeting for it. However, sponsorships allowed us to add a lot more scholarships and subsidized slots. It also gave us the opportunity to invite the local community of founders and funders to our closing night.

Outside of the Founder Summit and Sureswift Capital portfolio and mentors, everybody else needed to apply to attend. We wanted to ensure salespeople didn’t see this as an opportunity to sell to founders to protect the sanctity of an open and safe space.

More importantly, an application process was our way of ensuring the make up of Summiteers was representative of the Calm Company movement. We wanted to make sure that women, people of color and other underrepresented folk were able to attend — their voice and experience was needed to create a comprehensive culture of shared learning. We took the time to reach out and invite communities and groups outside of our core circle.

Again, this was another manual job but an important one.

Because we had two different ticketing platforms plus our own invite list, our head of no code engineering had to hack together an Airtable and Zapier situation to simplify the situation. However, we still had a lot of manual work — especially when it came to sending out acceptance emails and answering attendee questions.

Next time, and there definitely will be a next time, we plan to use an all encompassing tool that has a comprehensive waiting list.

If you’d like to find out more about what we got up to at Founder Summit CDMX, you can read a summary of the event here.

What else would you like to know about running an event? Drop us a note to hello@calmfund.com.

Why you should always check a candidate’s references

The first instalment of our Founder Knowledge series. Every week, we’ll be learning from a Calm company founder about a specific topic they’re hot on.

Being a founder is hard and to navigate the numerous roles and tasks that are needed of you, being resilient and able to deal with discomfort is key.